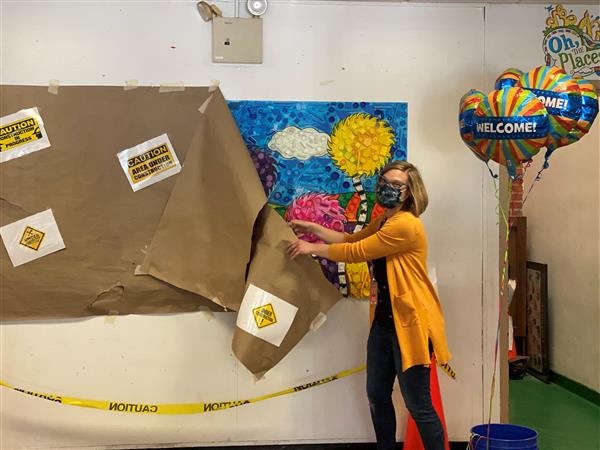 Fourth and fifth grade students sat in a semicircle of folding chairs in the hallway, media passes pinned to their shirts. Nearby, an area of the wall was covered in brown craft paper with “under construction” signs splashed across it. A woman emerged and walked up to a podium to address the crowd.

“Good morning! I’m Sarah Gilchrist, art teacher here at Bedford Hills Elementary School,” she said. “I want to welcome you to this very special occasion. We have a rather large group here at BHES including several members of the press and we have an even bigger crowd joining us virtually. Welcome to all of you.”

Gilchrist and the student “reporters” were there to unveil a brand new collaborative mural just in time for Earth Day. The event was recorded in the morning and then watched throughout the school simultaneously later that afternoon.

To kick off the event, students asked Gilchrist a barrage of questions.

“How long have you been working on this artwork?” asked Drew.

“Who participated in creating this?” asked Sophia.

“What is the mural based on? Did you pick a particular character or scene?” asked Ben.

Gilchrist answered all of these questions and more during the roughly four-minute video event that celebrated the mural the school started together over a year ago at their Seuss Night celebration.

“The mural was initiated last school year during Seuss Night, when students collaboratively painted the scene,” she said after the unveiling video. “The mosaic pieces were added during this school year after the art studio reopened in February. Grades one through five, as well as last year’s fifth graders, all had their hands in creating it.”

When the brown paper on the wall was removed by students — with an accompanying drum roll — a bright and colorful work of art was revealed. A composite of Dr. Seuss landscape scenes, the mural is covered with a mosaic of recycled plastic objects, many of which Gilchrist has been collecting for years.

“The environmental message of ‘The Lorax’ is reinforced by the use of the recycled plastic objects that create the mosaic on the mural’s surface,” she said. “These recyclables serve as a reminder. They also show the possibilities of beauty and transformation when we work together and reuse our resources.”

The mural was a great way for the school to come together as a community — especially during a year when that felt incredibly challenging. 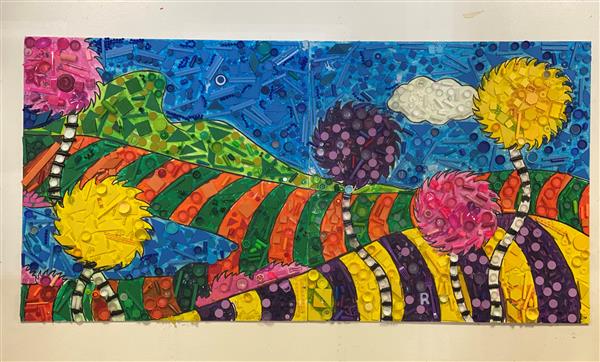 “The mural was a wonderful opportunity for students to safely collaborate, create and connect with one another,” Gilchrist said. “It is unique in that its creation began at the start of the pandemic and was completed and installed in our current time of hope.“

Not surprisingly, hope is one of the messages evoked by the mural.

“It embodies our school community, perseverance, and, most of all, hope,” Gilchrist said. “One overarching theme that we often discuss in art class is ‘transformation.’ It shows how we as individuals and as a community can view a challenge, a problem or even a mistake as an opportunity to work together, problem solve and create something beautiful.”

You can watch the unveiling here.