Did you know that asteroids can be as small as cars or as big as states? Or that the word asteroid actually means “star-like object”? Did you know that Ancient Greeks used to call comets “hairy stars”?

Sixth graders had an opportunity to experience the large inflatable planetarium as part of a science enrichment program. The district rented the planetarium for a week and both middle and high school students had access to it. Teachers did a special three-hour training with Orange-Ulster BOCES to learn what the planetarium could do before using it as a teaching tool.

At the middle school, students used the planetarium to learn about space rocks.

“One of the things students have a hard time understanding is that these things are in orbit,” said teacher Gregory Capone, who ran the program alongside Theresa Benitez and Kristen Auerbach. “For most of them, this is their first experience on what meteors, asteroids and comets are.”

Sitting inside the planetarium, students could track the objects’ movement in the sky to better understand phenomena like meteor showers.

“If they can see the orbit, they can start to understand meteor showers and how they happen,” Capone said.

Students were divided into three groups to stagger their use of the planetarium and prevent overcrowding. Those not experiencing the show started researching space rocks to get background information. With help from BrainPOP, NASA’s website and other resources, students filled out graphic organizers that would eventually become part of a slide presentation.

The research complemented the visual experience students had inside the planetarium. There were lots of oooohs, ahhhhs and gasps as students pointed out what they saw.

“We put up videos, but there’s something about being in there and seeing everything in motion on that big screen that really brings it home,” Capone said. 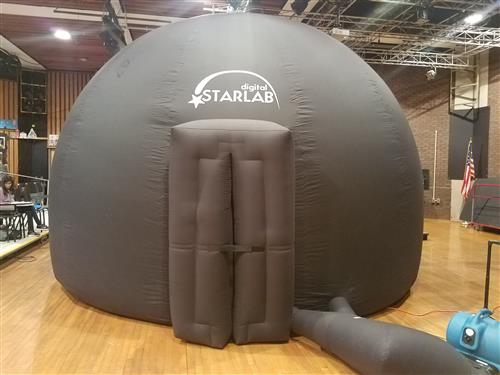